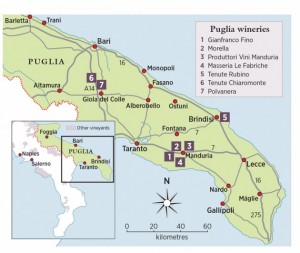 The region of Puglia, or Apuglia as it is sometimes written, is mostly on the Adriatic side of Italy stretching from the southeastern bottom side of the boot around to the Gulf of Taranto. With its miles if beaches and seashore, it is a summer refuge for Italians who flee the cities in the hot summer days. But if you visit outside of the months from June through August you will find some beautiful scenery, delicious food and surprisingly good wine.

In late spring I was asked to present and give brief background information for several red wines during a tasting conducted by friends who own a new distributorship in the Austin area. This distributorship, WST Wine, a part of We Select Texas, handles primarily small Italian producers not available through major distributors. For this tasting they featured the wines imported by my friend Joseph Defronzo at SMD Selections .

During the tasting, we tried two surprisingly good wines from Puglia. Before I describe these wines I must digress and explain that before this tasting I was not a fan of most Puglian red wine, especially Primitivo, and expressed this opinion readily. Thus I now eat my humble pie without relish.

The most common red wine found in Puglia features the red grape Primitivo which is a cousin to the US grape Zinfandel. The majority of the Primitivo wine comes from the area around the town of Manduria in the south central part of the region. A lighter offering is Primitivo di Gioia del Colle from the northern part of Puglia. The house wine in most trattorias or osterias will be Primitivo, but if you are not a fan, they will usually offer Salice Salentino (a Negro Amaro and Malvasia blend) instead.

Our first Puglian wine was a 2011 DOP Primitivo di Manduria Old Vines Folle from Lucarelli. Made from 80-100 year old vines, this 14 percent alcohol offering featured soft tannins and good balance. It finished medium long and smooth. Having previously been a non-believer, I am happy to rate this excellent example of Primitivo a 90.

The second surprise came in the form of a 2015 Nero di Troia from the Massimo Leone winery, a 13.5 percent alcohol wine made from 100 percent Uva di Troia grapes. Legend has it (remember, this is Italy where there is a legend behind everything) that Diomedes, a good friend of Ulysses, brought this grape to the northern part of Puglia where it is now making a strong comeback. If true, I want to thank Diomedes personally for this gift. This was a very nice medium wine that finished very smooth and pleasant and was a major surprise to me. I rated this wine an 89 and recommend it for pasta dishes and white meats.

The tasting also included some wines not originating in Puglia. We started with a very good 2012 DOC Barbera d’Alba Le Ciliege from Manzone which I rated an 89, then moved onto a nice 2012 DOC Rosso di Montalcino from Maurizio Lambardi which I rated a 90 and finished with an always pleasing 2014 IGT Nero d’Avola from Bacaro which I rated at a 90 (I really like good Nero d’Avola).

One of the reference texts that I use – Native Wine Grapes of Italy by Ian D’Agata (University of California Press) – will provide all the facts on Italian grapes you ever wanted to know and a whole lot more. A number of points in this article come from this book.