Italy has many great family-run wineries in all parts of the country. One of the oldest such families is the Mazzei family, which for 25 generations has been making wine (since 1435) in Tuscany at Castello di Fonterutoli. Today the family also has holdings in Maremma in the western part of Tuscany and at Noto in Sicily.

Recently, my wife and I were invited to a wine tasting/lunch at one of Austin’s better Italian restaurants by our friend at Taub Family Selections, Evan Noble. The tasting, hosted by Giovanni Mazzei, Export Manager for the family, featured a ladder of four years of the Mazzei family’s Siepi Super Tuscan wines. The Mazzei family began planting Merlot in their Chianti Classico territory at the Siepi vineyard in the 1980s. At the start of the 1990s the marriage of their Merlot and Sangiovese was conceived.

Siepi is a blend of 50% Sangiovese and 50% Merlot, all grown on the Siepi vineyard at Castello di Fonterutoli. The grapes are hand-harvested separately about nine days apart at the middle or end of September. Aging is accomplished in French oak 225 lt. barrels, with all or most of the barrels being new oak. About two months before bottling the blending occurs. 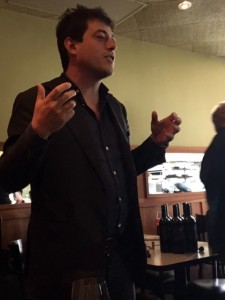 The tasting began with the oldest of the ladder, a 2004 Siepi Toscana IGT 14.5% alcohol wine. This wine was deep garnet in color and had a superb but complex nose with strong leather scent. It started medium but finished very long and smooth. The big finish featured strong tannins. I loved this excellent example of Super Tuscans and rated it a 94/95.

Our second wine was a 2013 Siepi Toscana IGT, a 14.3% alcohol offering. This wine was also deep garnet in color but had a lighter bouquet also with a light leather nose. The 2013 Siepi finished lighter than the 2004 with a nice long smooth ending. This wine was a more European elegant type and I rated it a 91/92. I fear that it was in the shadow of the 2004 Siepi and will improve with age.

Next we tried the 2015 Siepi Toscana IGT, a 14.4% alcohol wine. The 2015 Siepi was a deeper garnet color than the 2013 and had a lighter nose. It finished very long and exceptionally smooth. The 2015 was a show stopper for a “younger” Super Tuscan and should become even better with more bottle aging. I rated the 2015 Siepi a 94/95 with significant upside potential.

The final wine was the 2016 Siepi Toscana IGT, a 14.56% alcohol offering. The 2016 Siepi was a lighter garnet in color and had a very light nose. It had a medium finish which was smooth and elegant. This was a very nice wine but to me it suffered in comparison with the 2015 Siepi, a really magnificent Super Tuscan. I rated this wine a 91/92 and I believe that it will improve with further bottle aging.

Thanks to the folks at Taub Family Selections and Signor Giovanni Mazzei for a most enjoyable wine tasting and lunch.