When thinking about the best areas of Tuscany for high quality wines, many people consider only Montalcino, Montepulciano and the Chiantio Classico areas. However, in the past thirty or so years a challenger to these has arisen. In the northwestern part of the region of Tuscany lies the DOC area of Bolgheri. Here, in the 1990s, some of the best known producers in Italy planted a number of French varietals which have grown extremely well and served as the grape basis for the Super Tuscans that today are rated among the best wines in the world and sold at commensurate  prices. 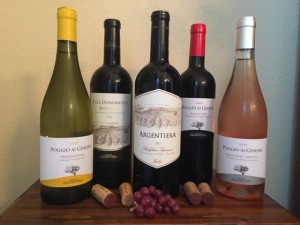 Overlooking the Tuscan Archipelago at an altitude of 200 meters above sea level, the Tenuta Argentiera winery occupies 80 hectares (almost 210 acres) on which are planted Cabernet Sauvignon, Cabernet Franc, Merlot, Syrah, Petit Verdot and Vermentino. The winery has been in existence for twenty years. Recently  I was sent a selection of Tenuta Argentiera wines to review.  As is my custom when tasting wines at home, the tasting occurred with meals prepared by my gourmet cook wife, Terry, on separate days.

Let us begin with the only white wine offered., a 2019 Poggio Ai Ginepri IGT Toscana Vermentino. This is a 12.5% alcohol offering made from 90% Vermentino and 10% Sauvignon Blanc grapes. The Vermentino was fermented in stainless steel tanks at controlled temperature. It was pale straw in color and had a strong fruit nose. We tasted this with a main course of Melanzana Rollatine (eggplant rolled with ground meat) with gamele pasta in a tomato sauce. The Vermentino finished medium long, very crisp, fruity and smooth. Both my wife and I liked this wine and I rated it a 90/91.

The second wine was a 2019 Poggio Ai Ginepri DOC Bolgheri Rosato, a 13% alcohol selection made from a blend of 50% Cabernet Sauvignon and 50% Syrah grapes. The Rosato was fermented in stainless steel tanks at controlled temperature. It was a blush color and had a light fruit nose. We paired this wine with an entree of Pollo Impanato (breaded chicken breast) in a cream and mushroom sauce accompanied with ravioli stuffed with cheese. The Rosato finished medium, crisp and smooth and went well with the entree. I rated this wine an 89/90.

Moving into the red wines, we tried a 2018 Poggio Ai Ginepri  DOC Bolgheri Rosso, a 14% alcohol blend of 40% Cabernet Sauvignon, 30% Merlot, 20% Cabernet Franc and 10% Petit Verdot grapes. Maceration and fermentation of the Poggio Al Ginepri occurred in stainless steel tanks for a period of less than 20 days at controlled temperature not exceeding 28°C. Half of the wine was transferred into 225L French oak barriques where it completed the malolactic fermentation and began its aging for nine months. The other half completed its malolactic fermentation in the stainless steel tanks. That 50% was then aged in French oak tonneaux for nine months. The resulting wine was a dark garnet in color and had a complex nose. It was served with my wife’s Cavatappi pasta in a sauce of salsiccia (pork sausage), tomato, peppers and mushrooms. The Poggio Ai Ginepri finished very long and very smooth. I really liked this elegant but big European style red wine and rated it a 92.

The second red was a 2018 Villa Donoratico DOC Bolgheri Rosso, a 14.5% alcohol blend of 50% Cabernet Sauvignon, 30% Merlot, 15% Cabernet Franc and 5% Petit Verdot. The grapes were hand selected and picked and the vinification was accomplished separately for each type. Fermentation and maceration for each type was done in stainless steel tanks at controlled temperatures that did not exceed 28°C for no more than 25 days. The wine was then transferred to 225L barriques and tonneaux of French Oak where the malolactic fermentation was completed and aging for 12 months begun. The Villa Donoratico was served with an entrée of Maiale Milanese (fried breaded pork loin) accompanied with a Risotto con carciofi e limone (rice with artichokes and lemon). The wine was a dark garnet color with a light leather nose. It finished medium long and smooth and I rated it a 91. I thought that the finish should have been a bit longer but it was a very nice wine that held up as you drank it.

A third red was a 2017 Argentiera DOC Bolgheri Superiore, another 14.5% alcohol blend of 50% Cabernet Sauvignon, 40% Merlot and 10% Cabernet Franc. Hand selected grapes of each type were vinified separately. Fermentation and maceration was accomplished in stainless steel tanks at controlled temperatures not exceeding 30°C for 25-30 days. The wine was blended and transferred into new 225L barriques of French Oak where the malolactic fermentation was completed and 16 months aging begun. The Argentiera was served with an entrée of bacon wrapped beef filet accompanied by twice-baked potatoes and zucchini topped with melted cheese. The Argentiera was a very dark garnet in color with a pleasant fruity nose. It finished very long and exceptionally smooth. I rated this big yet elegant wine a 95 and I believe that it may improve with age. 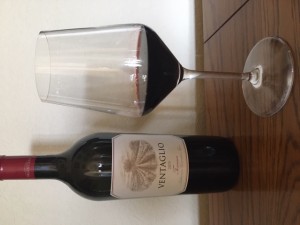 Our final wine was Tenuta Argentiera’s flagship red wine, a 2015 Ventaglio IGT, a 14.5% alcohol blend 85% Cabernet Franc and 15% Cabernet Sauvignon. In Italian, the word “ventaglio” means fan or fan shaped and the wine was named this because the single vineyard from which this cru was made is fan shaped. The grapes were hand selected and transferred to small truncated French oak tanks. Maceration took place for 28 days with daily pump over and manual cap punch down at controlled temperatures between 28-30°C. The wine was then put into French and Austrian oak tonneaus and barriques for malolactic fermentation. After this the wine was aged in oak barrels for 18 months followed by two years in the bottle. Only 2950 750ml and 250 1.5 liter bottles were made. My wife served the Vantaglio with a beef roast accompanied by potatoes and carrots cooked in red wine with the roast. The wine was a very deep garnet in color with a complex nose. It finished very long and exceptionally smooth with a slight fruit taste. Both my wife and I were wowed by this wine. We loved the elegant European style and smooth taste and I rated the Ventaglio a 96/97. I recommend that you decant this wine at least an hour before serving and serve it at 16-18°C. If you are looking for a special wine for a special occasion this would be an excellent choice.

Based solely on this single tasting, I would say the Bolgheri DOC may be a strong contender to join the elite areas of Tuscan wine.

Thanks to Paola Chiapasco at the Italian media relations firm wellcomonline.com afor sending  and Signor Stanislaus Turnauer and his team at Tenuta Argentiera for these wines for review.