In the low hills of eastern Piedmont, northeast of the city of Asti and between the small towns of Vignale Monferrato and Casorzo, lies Societa Agricola Hic et Nunc Srl. Hic et Nunc, Latin for Here and Now, began in 2012 when Valentina and Massimo Rosolen, second generation entrepreneurs from the city of Bergamo, purchased over 100 hectares of land, 20 hectares of which had long been dedicated to vineyards.

Their plan was to build a state-of-the-art winery and wine resort that featured native grapes in a facility that included high visibility of wine making in the native setting. In 2016 it was decided that Hic et Nunc had sufficient facilities to begin producing its own wines under the Hic et Nunc label. Today the winery produces 50,000 bottles per year from Barbera, Dolcetto, Cortese and Grignolino grapes. Hic et Nunc’s vineyards also include Nebbiolo, Freisa and Baratuciat grapes which are planned for wine production in the coming years. In addition, the property includes the Ca’dell’ebbro wine resort where visitors can see the wine making as well as explore the beautiful countryside.

A press release from Wellcome sparked my interest in this winery, and soon after, Hic et Nunc owner Massimo Rosolen sent samples of their Barbera for me to taste. The Barberas came from vines that varied in age from 40 to 100 years old.

As always these days, I tasted these wines along with my wife’s excellent cooking. 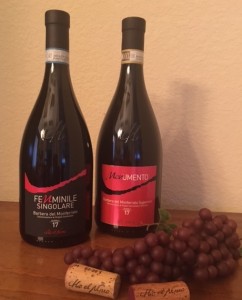 Our first wine was a 2017 Femminile Singolare Barbera del Monferrto DOC, a 100% Barbera grape 14% alcohol offering. The Femminile Singolare was fermented on the skins for 25 days followed by 20 months aging in stainless steel. The resultant wine was a deep ruby in color with a fruit, spice and chocolate nose. It was served with breaded fried melanzane accompanied by pasta Norma and insalata mista. I could not believe that this wine was not aged in wood because it finished very long and extremely smooth. I loved this wine and rated it a 92 and think it might even improve with age.

The second and last wine was a 2017 Monumento Barbera del Monferrato Superiore DOCG, a 14% alcohol offering made from 100% Barbera grapes hand picked after previous thinning from the best “crus” of the property, the Vasio and Bossola vineyards. The Monumento had 30 days of maceration with the skins followed by aging of 20 months in French oak tonneaux. The resultant wine was a very deep ruby in color with a complex fruit and spice nose. We tasted it with braised lamb shanks accompanied by polenta and insalata mista. Once again I was amazed at the taste of this big but elegant Barbera. It finished very, very long and extremely smooth. I rated it a 94 and considered it one of the best Barberas I have ever tasted. The other dinner guests felt the same.

Though Hic et Nunc has only been producing their own wines for a short period, the age of their vines came through in both of the Barberas we tasted.

I offer my compliments to the winemaker, and look forward to visiting their winery when travel to Italy resumes, hopefully in the fall.

Hic et Nunc’s wines are imported into the U.S. by RARM Imports.