An Italian Winemaker in Romania 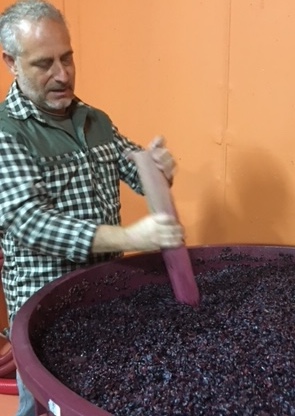 Sometimes in family-owned businesses there comes a time for a change.

This occurred at Di Filippo Winery, one of my favorites in Umbria. Co-owner, winemaker and agronomist Roberto Di Filippo sold his interest in Di Filippo Winery to other family members and left that winery. He purchased another much smaller winery, Cantina Plani Arche, in the same general area of Umbria, at which he could once again produce the type of typical Umbrian wines he had previously made at Di Fiippo.

In 2009 DiFilippo and an Italian friend living in Romania, Roberto Pieroni, started La Sapata Crama Delta Dunarii, a 20-hectare organic vineyard and winery in the Danube River Delta of Romania. Here they grow a variety of native Romanian grapes such as Feteasca and Rkatitel, plus a number of international varietals including Reisling, Merlot and Cabernet Sauvignon. Until Roberto told me about this venture I had never heard of Romanian wines much less tasted them. However, since I believe that Roberto DiFilippo is one of the best winemakers in Umbria, I was intrigued.

On a warm October day we visited DiFilippo at his new winery, Plani Arche. Before we tasted his new Umbrian wines, he offered to let us taste some of his Romanian wines. I jumped at the chance.

The first Romanian wine was a 2020 Babeasca Neagra Rosé DOC, a 12.5% alcohol sparkling wine made from 100% Babeasca Neagra grapes. This wine was a peach color with a very light fruit nose. It finished medium, light and fruity. I liked this wine and rated it a 91/92. It would be a great aperitif with cold cuts or other such food.

The last Romanian wine was a 2020 Aligoté DOC, a 13% alcohol white wine made from 100% Aligoté grapes. This wine was a pale yellow color with a beautiful light fruit nose. The Aligoté grape was a French grape brought to Romania some 75 years ago. The wine finished medium light and smooth and got better after opened awhile. I liked the Aligoté and rated it a 92.
As you can see from my ratings, I thought Roberto’s Romanian wines were excellent.

Now we move to Roberto’s new Umbrian wines. The first wine we tasted was a 2020 A Modo Mio IGT (“My Way” in Italian), a 12.5% alcohol, 100% Trebiano Spoletino grape offering. The first fermentation was in stainless steel tanks at 18°C with a second fermentation of 2 months in the bottle. The A Modo Mio was a pale yellow in color with a light fruit nose. It finished medium with a slight frizzante (fizz) and I rated this wine a 91.

Our second wine was a 2020 Grechetto IGT, a 13.5% alcohol, 100% Grechetto grape offering. This wine was fermented off the skins at low temperature and aging was in stainless steel tanks on the lees. The Grechetto, an organic Umbria IGT wine, was pale yellow in color with a very light fruit nose. This elegant Umbrian white wine finished medium and very smooth but slightly tannic. I loved this wine and rated it a 92.

Next we moved to red wine. We tasted a 2019 Montefalco Rosso DOC, a 14% alcohol blend of 60% Sangiovese, 25% Barbera and 15% Sagrantino grapes. Fermentation was for 10 days with aging in stainless steel for 12 months. The Montefalco Rosso was ruby in color with a light fruit and spice nose. It finished medium long and very smooth. I loved this elegant example of one of my favorite red wines and rated it a 92.

The flagship red grape in Umbria is Sagrantino and that was our next wine. We tasted a 2017 Montefalco Sagrantino DOCG, a 16% alcohol, 100% Sagrantino grape wine. Vinification was a prolonged normal maceration with aging in oak for 12 months. The result was a wine that was deep ruby in color with a nice fruit nose. It finished long, smooth, very nice and tannic but pleasant. I loved this Sagrantino and rated it a 94.

I was very pleased to see that Roberto had moved seamlessly into his new winery and that all his years of effort in Romania had been successful. He told me that he did not plan to have his Umbrian winery produce more than 40,000 bottles/year and would concentrate his efforts at growing the Romanian winery. 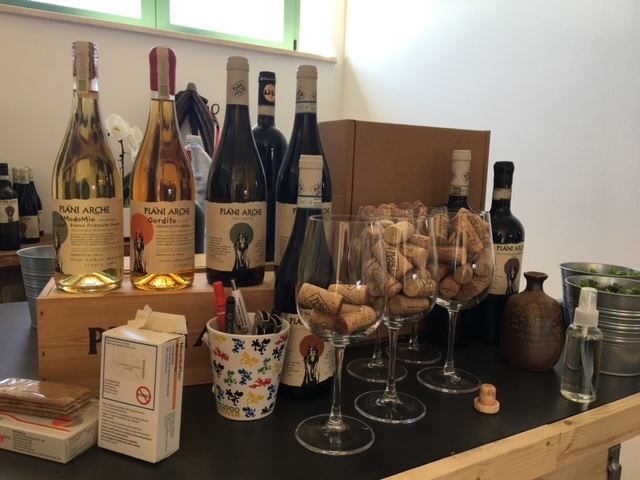