A few months ago, I participated in a Zoom tasting of a “ladder”* of Amarone wines from the Brigaldara Winery in the Verona area, with wines shipped to me by Wellcom Marketing.

Zoom tastings are one of the products of the Covid pandemic. Wineries in Italy immediately recognized that they had to do something to ensure that coverage of their new wines did not stop. Since wine writers could not travel to Italy to learn about and taste their wines, the wineries soon began to use the “Zoom” meeting platform to continue to spread the word on their wines.

To have a “Zoom Tasting,” the wineries, along with their PR firms, choose a small group of wine writers and invite them to participat. Once the wineries have the agreement of the selected writers, they choose a time for the tasting and send sample bottles of the wines to each participant. Usually the wines arrive several weeks before the tasting, allowing them to settle from the shipment.

Thus I found myself online to taste a group of Brigaldara Amarone wines. 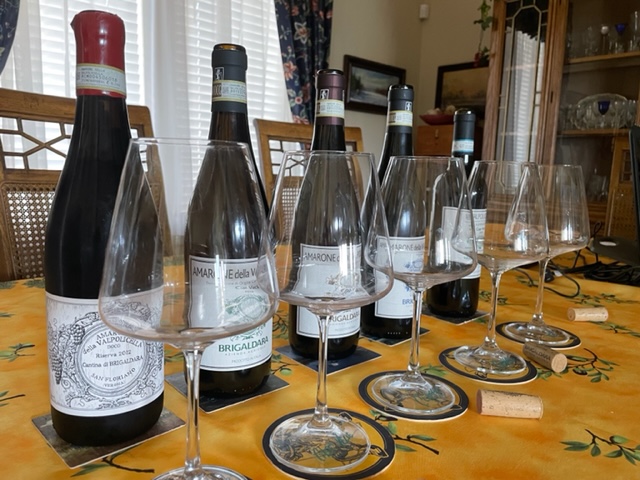 The name “Brigaldara” first appeared in land ownership records in the 12th century, and the property changed hands many times over the centuries. In 1928 Renzo Cesari purchased the 120 hectare. In the 1980s his grandson, Stefano Cesari, decided to change careers and get into the wine business, and is Brigaldara’s current owner.

Stefano Cesari first rented acreage from his father, but today he and his sons Lamberto and Antonio operate 47 hectares of vineyards in the Valpolicella area north of Verona, from which they produce 300,000 bottles of wine ayear.

Stefano practices what the winery refers to as “sustainable agronomy with innovation.” It was among the first to use wood in the aging process two ways: with time in small barrels, and finishing with time in large 25 HL Slovanian oak casks. Their fermentation process always keeps the wine in contact with the skins.

Many believe that Amarone wines are too heavy for everyday drinking, but the Cesari family wanted to produce Amarone wines that were drinkable on a regular basis, so Brigaldara keeps their Amarone’s sugar content between zero and 5 percent.

Did the tasting show that Brigaldara wines met the family’s desire for an everyday wine?

The Superiore had the typical ruby color and a light nose. It was a very nice young medium red wine and I rated it a 90.

Our first Amarone was a 2016 Amarone della Valpolicella Cavolo, a 16% alcohol blend of 59% Corvina, 21% Corvinone, 17% Rondinella and 3% other red grapes. The Cavolo had a beautiful nose and the normal ruby color. This was a very drinkable Amarone and I rated it a 91.

Next came a 2017 Amarone Valpolicella Classico, a 16.5% alcohol blend of 47% Corvina, 39% Corvinone, 6% Rondinella and 8% other reds. This old-style Amarone was a blend of various vineyards and was aged for one year in small oak barriques, plus two years in large 25 HL Slovanian oak casks. The nose was complex. I really liked this Amarone Classico. I rated it a 93/94.

The third Amazon was a 2016 Amarone della Valpolicella Case Vecie, a 16.5%-alcohol blend of 39% Corvina, 30% Corvinone and 31% Rondinella grapes. The color was the same ruby with a pleasant nose. This wine was aged for two years in oak barriques and another two years in 25 HL Slavonian oak casks. Repeating myself, I loved this wine and rated it a 94.

The last Amarone was a 2012 Amarone della Valpolicella Riserva, a cru blend of 55% Corvina, 25% Corvinone and 20% Rondinella grapes. This wine had almost 0% sugar with a light nose and ruby color. Taken from grapes from a single parcel of Cesari’s vineyards, this wine was aged for three years in oak barriques and a further two years in 25HL Slovanian oak casks. It finished very big and very smooth and I rated it a 95.

The final wine of our online tasting was a dessert wine called Ricioto della Valpolicella, a 15%-alcohol blend of 55% Corvina, 25% Corvinone and 20% Rondinella grapes. After picking, these grapes are crated and left to dry in an aired loft. After pressing and fermentation, the wine is aged for two years in large 25HL Slovanian oak casks. I don’t rate this type of wine, but my wife, who loves dessert wine, loved it.

After tasting all of these Amarone wines I believe that the Cesari family has achieved their goal of producing wines that are lighter, and work for drinking on a regular basis. I appreciated the opportunity to taste these wines I highly recommend them.

These wines are now available in the U. S. They’re imported by Vinifera Wine Services.