The estate has been in the maternal side of the family since 1620. During World War II, the father of  current owner Jurek Mosiewicz was an officer in the Polish army. When Poland fell to the Russians (who were then allied with the Germans), he was captured and imprisoned. Later, when the Russians sided with the Allies, he was released and joined the Polish Brigade fighting with the Allies. That unit was sent to Italy and participated in the liberation of Italy. It was during that time that he met the daughter of the landowner and they fell in love and married.

After the war the  Mosiewicz family became successful in equipment manufacturing headquartered in the Milan area. Wanting to give something back to the place where their modern family had begun, they decided to invest in the modernization of the Marche estate’s winemaking which had been started in 1916 by the maternal side of the family. Today, Signor Mosiewicz presides over a modern winery built 15 years ago with vineyards that produce both native Italian grapes like Sangiovese, Ribona (also known as Maceratino Bianco) and Montepulciano as well as French varietals like Merlot. The winery produces between 180,000 and 200,000 bottle per year. It is not organic but prides itself in saying that it is environmentally clean.

Introduced by our Marche guide Monia Scoccia, we were fortunate to have a tasting one afternoon; later in the week we were invited back for a wine dinner hosted by Signor Mosiewicz that featured the wines we had previously tasted.

Now let’s get to the wines:

The first wine was a 2016 Marche Bianco IGT Giulia Morichelli D’Altemps, a 100% Ribona. This 13.5% alcohol wine made from hand-picked grapes was fermented in stainless steel tanks and aged for 12 months in stainless steel tanks followed by 12 months’ refinement in the bottle. The Giulia Morichelli D’Altemps was pale yellow in color with a very light fruit nose. It finished medium and full bodied. I rated this wine an 88/89 and believe it would be an excellent aperitif.

Next we moved to the red wines. Our second wine was a 2016 Marche Rosso IGT Teodoro, a 14 % alcohol, 100% Montepulciano grape offering. Another wine made from hand-picked grapes, the Teodoro received its alcoholic fermentation in temperature controlled stainless steel tanks and its malolactic fermentation in oak barriques. It was then aged for 12 months in French oak barriques (30% new and 70% used) and finally 12 months in the bottle. The Teodoro was a deep garnet color with a complex nose. It finished medium and smooth but a bit light for a Montepulciano. I rated this wine an 89.

The second red wine was a 2013 Marche IGT Sangiovese Antek, a 14.5 % alcohol, 100% Sangiovese grape wine. This hand-picked-grape wine was fermented in temperature controlled stainless steel tanks. It was aged for 20 months in stainless steel tanks followed by 18 months in Slavonian oak barrels and finally a minimum of 12 months in the bottle. The result was a wine with a medium dark garnet color and a clean Sangiovese nose. It finished long and very smooth. I really liked this bigger and stronger Sangiovese wine and rated it a 90/91.

Our final wine was the flagship red wine of Murola. We tasted a 2013 Marche Rosso IGT Brunforte, a 15% alcohol, 100% Merlot grape wine. Another hand-picked wine, it received its alcoholic fermentation in temperature controlled stainless steel tanks and received full malolactic fermentation. The Brunforte was aged for 21 months in stainless steel tanks then further aged for 20 months in 30 Hl casks of Slavonian oak. 18 months in the bottle completed the aging process. The result was a wine of deep garnet color with a light leather nose. It finished medium long and very smooth. I rated this excellent example of an elegant European Merlot as a 92/93.

The wines of Murola are definitely worth purchasing.

Tenute Murola has a great story of its history and owners who have, at least in my opinion, been successful in bring back added value to the land of their origin.

Thanks to Signori Jurek Mosiewicz, Angelo Calabrese, Ettore Pierini and other members of the staff for their warm hospitality. 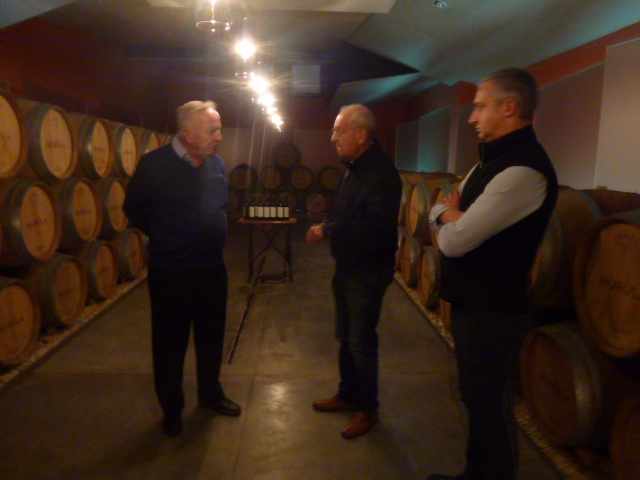