Located in the southern part of the region of Marche in the province of Ascoli Piceno is Azienda Agricola Simone Capecci. The Capecci family were originally sharecroppers who worked the land near the village of Ripatransone. Since 1988, Simone Capecci, a member of the fourth generation of the family in this area, has owned a winery that produces both red and white wines from grapes native to the area.

The Capecci vineyards are at an altitude that varies from 250 to 300 meters above sea level. The soil is primarily clay and the vineyards are organic. 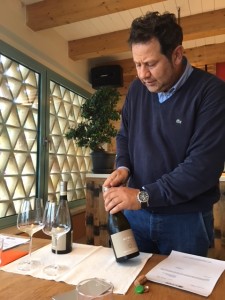 Innovation at this winery is a constant focus. In the 2013 harvest, Simone Capecci selected grapes from vineyards that had been used to conduct an initial trial in 1990 of the Pecorino grape variety in 1990. Though ancient in the area, the Pecorino variety had become almost extinct before its resurgence in 1990. After being hand-harvested in early September 2013, the Pecorino grapes were de-stemmed and left fermenting without use of yeasts. This process lasted several weeks during which time the wine was sealed without outside contact.

Surprisingly, oxidation did not occur. The skins were left macerating with the wine in an experiment to see if the wine would remain intact until the end of the maceration and aging process.

Eighteen months later, the tank was opened and Simone Capecci discovered that a cap of skins stratified in the center of the tank and this separated a clear top from a turbid part in the bottom. Each part was drawn off separately and a decision was made to bottle this as two wines: MVRIA Above Skins and MVRIA Under Skins.

It is only when the bottle is opened that this wine is exposed to oxygen and the aromas allowed to develop. This Pecorino is said to be a “red wine dressed in white.” It can be drunk at room temperatures.

On a rainy early fall morning we visited the Capecci winery, taken there by our Marche guide Monia Scoccia with Discover Marche. Our tasting was conducted by Simone Capecci, the winery’s owner and winemaker.

Before we got to tasting the MVRIA, we began with the white wines. A 2017 Marche Passerina IGP Tufilla, a 12.5% alcohol, 100% Passerina grape offering was our initial wine. Passerina wines have become a new favorite in recent years both inside and outside of Italy. Made with handpicked grapes, the Tufilla was the product of a short maceration with fermentation in concrete tanks and aging on the dregs. It was a very pale straw yellow color with a pleasant fruit nose. It finished medium long and very smooth. I liked this wine and rated it a 90.

Our second wine was a 2017 Offida Pecorino DOCG Ciprea, a 100% Pecorino grape 13.5% alcohol offering. Also made with handpicked grapes, this wine had a short maceration with fermentation in concrete tanks and approximately 6-8 months aging. It was straw yellow in color with a light fruit nose. It finished medium full, very smooth and fruity. Another excellent wine, I rated this wine a 91/92. 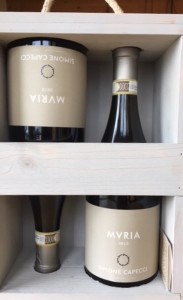 Then we came to the MVRIA wines. We sampled both the Above Skins and Under Skins varieties of the 2013 Offida Pecorino DOCG MVRIA, a 100% Pecorino grape, 13.5% alcohol wine. Both were gold in color (remember, as white wine ages, it generally becomes darker in color) with a complex nose. They finished medium long and very smooth. I rated the Above Skins a 91 and the Under Skins a 93. The latter was almost like an orange wine. Both were excellent.

Moving to the red wines, we tried a 2017 Marche Sangiovese IGP Fedus, a 100% Sangiovese grape, 13.5% alcohol wine. The Fedus had six months’ fermentation and a long maceration with the skins in concrete tanks. It was a garnet color with a light nose, and finished medium long, slightly fruity and very smooth. I rated this elegant wine a 91.

Our second red was a 2016 Rosso Piceno Superiore DOP Picus, a blend of 70% Montepulciano and 30% Sangiovese grapes. This 13.5% alcohol wine had a two-week fermentation and maceration in stainless steel, followed by aging in French oak barrels for 12-15 months. The result was a wine with dark purple color and a light leather nose. It finished long and smooth and I rated it a 91.

The last wine and signature red from the winery was a 2013 Offida Rosso DOCG Qvintaregio, a 100% Montepulciano grape old vineyard selection. The Qvintaregio was a 14.5% alcohol offering made with handpicked grapes. It had fermentation and maceration in concrete tanks followed by a 24 month aging in new wood barriques. It was deep purple in color with a beautiful nose. The wine finished very long and very smooth and I rated this elegant example of a Montepulciano a 94.

Our thanks go to Simone Capecci and his staff for a most enjoyable tasting of some excellent wines. I recommend the wines of Simone Capecci highly. They are imported in the USA by R.S. Lipman in Nashville, TN.

Neil Duarte travels to Italy and writes about its wines and food for WineLoversPage.com. More about Neil.