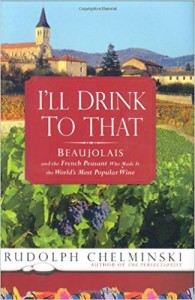 In his 2007 book, “I’ll Drink to That,” Rudolph Chelminski tells the success story of Georges Duboeuf, the “French peasant,” as Chelminski says, who has become one of the world’s most successful wine makers and led the transformation of his region from rural backwater to source of highly popular, commercially successful wines.

Chelminski tells of Duboeuf’s life along with the history and culture of Beaujolais from the 14th century to the present, paying lavish attention to Duboeuf’s role in the evolution of the Beaujolais Nouveau craze and the associated rise in popularity of Beaujolais in general.

As Chelminski puts it in his foreword, Duboeuf was only 18 when he “revolted against an unfair, illogical distribution system run for the benefit of a dealers’ cartel, and did it so well and so thoroughly that he rose to become the biggest dealer of all – but one of an entirely new style. Beaujolais, then, is a double success story, the wine and the man … ”

Reading this book and, of course, tasting a little of the wine, is the next-best thing to touring the Beaujolais, eating and drinking and meeting the wine makers. Thirteen years later, as we mark the death of Georges Duboeuf this past January 4, I’m reading the book again.

If you’d like to read “I’ll Drink to That” too, the hardcover edition is out of print, but Amazon.com has some used copies available starting at $2.42.

You can still get it for Kindle, though, for a thrifty $4.99 To buy it and start reading it immediately on your Kindle device or free app, click here to purchase it now.