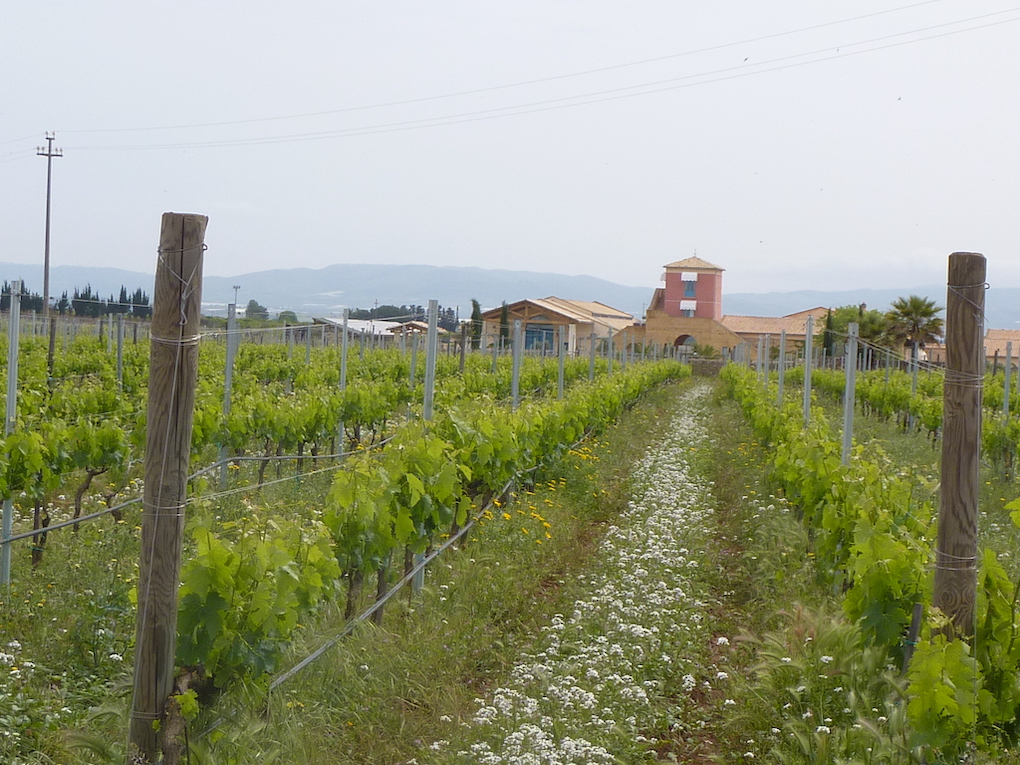 Sicily, the ancestral island home of many Italian-Americans, has a long and interesting history including that of its wine production. Over twenty-five hundred years ago, the island was an integral part of Magna Grecia, the extension of Greek culture and power in the Mediterranean Sea. Well preserved ruins still exist in parts of the island. The Greeks were followed by the Romans, Moors and a host of others, as Sicily was an often-invaded island. Perhaps it was the Greeks who introduced wine to the island as they did in other southern parts of Italy. In any case, Sicily has long grown grapes and produced wine.

For many years Sicily was the second largest producer of wines in Italy, with the majority of this being shipped off the island to the north of Italy as a blending ingredient for various alcoholic drinks. Fortunately, the producers came to realize within the last thirty years that the varying terroir of the island allowed for the production of some excellent wines if only they changed the emphasis from quantity to quality. Today you find some really superb wines made by producers all over the island.

Red wine is the main offering in Sicily. The grape is predominantly Nero d’Avila (except from the Etna area) which translates as “the Black of Avila.” Avila is a small town in the southeastern part of the island.

As much because of the various soils over the island, as the different wine makers, the taste can vary depending on the location where you are drinking Nero d’Avila. My wife and I found this out when we traveled all over the island some eight or nine years ago. However, all of it was very enjoyable.

The only DOCG in Sicily is a wine named Cerasuolo di Vittoria, a blend of Nero d’Avila and Frappato. Frappato is a much lighter red grape found in the area around the city of Vittoria. I wrote about this when I reviewed several of the producers including COS, Arianna Occhipinti and Planeta in 2011. The Frappato softens the Nero d’Avila somewhat if you are looking for that in your wine. Rather than offer only the DOCG and DOC blends, some producers, including COS, age the wine in amphora and label it IGT. I found this really excellent.

Producers, especially Planeta, have also introduced French varietals as well as grapes from other parts of Italy. Judging by my previous tastings of these during my initial visit, these grapes flourish in Sicily.

The exception to Nero d’Avila occurs in the area of Mt. Etna. There you will find a very different terroir, one that is volcanic in nature enriched by the many eruptions of Mt. Etna over the years. The primary red grape here is Nerello Mascalese. This grape thrives in the rich soil and higher elevations of the vineyards. The majority of the vineyards are on the north slope of Mt. Etna, but a number of producers have started vineyards on the south slope despite the many eruptions there. My limited experience with Nerello Mascalese wines produced by Frank Cornelissen and Planeta has been extremely positive. Sometimes producers blend Nerello Mascalese with Nerello Cappuccio to produce a softer wine. The Etna area is a hotbed of activity, attracting famous producers from other parts of Italy. Unfortunately, this may mean higher prices for really excellent wines.

The white wines of Sicily have not attracted the same degree of attention as the red wines. The workhorse white grape in Sicily is Catarratto. It produces a nice dry white wine that you might find is the house wine on an Italian cruise ship. The good thing about Catarratto is that the wines are generally not that expensive. Another local grape is Inzolia which can produce some very nice dry white wines. Last but not least is Grillo which also can be a very nice dry white wine and is the main ingredient in Marsala wine. All of these are becoming more available in the US.

Once again, Etna is a different matter. The main white grape is Carricante, which is the primary ingredient in Etna Bianco. I am not familiar with this wine but if it follows the path of the Etna reds, it should be very good.

No discussion of Sicilian wines would be complete without mentioning Marsala. The Marsala you find on the western side of Sicily bears little resemblance to the cooking wine labeled Marsala in the supermarket. This generally fortified wine is made primarily from Grillo grapes. In fact, some producers are offering non-fortified Marsala. I am told that it is very pleasant to drink as an aperitif. Hopefully, one day I will be able to return to Sicily and try it myself.

The island of Sicily and its people have endured much over the course of history. Today, it is a lovely place to visit that produces first-quality wines for all to enjoy. If you visit, you will surely enjoy your stay.

The The World Atlas of Wine by Hugh Johnson and Jancis Robinson is a valued reference which I referred to in writing this article. It is a book that any wine enthusiast would enjoy.