If you are looking for a sparkling wine to serve for your holiday party, I may have a suggestion here. My friend Irene Graziotto at Colangelo & Partners arranged for me to receive and taste some sparkling wines from the region of Trentino just before Thanksgiving. If you are unfamiliar with this area, Trentino is the southern part of Trentino-Alto Adige. The region is bordered in the north by Austria and Switzerland. However, the province of Trentino is the southern part of the region and does not border either country. Before World War I the region was part of the Austro Hungarian empire. 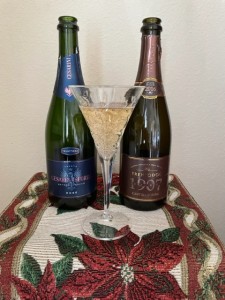 Trentino-Alto Adige is most known in wine for its various white wines although it does produce some good red wines. It is one of the few regions in Italy that I have not yet visited. However, I am familiar with the wines from there. Thus, I was happy to taste the sparkling wines that Irene had sent to me.

The first wine was a 2016 Cantina D’Isera Trentodoc 1907 Extra Brut, a 12.5% alcohol sparkling wine made from 100% Chardonnay grapes. After soft pressing, this wine underwent partial malolactic fermentation in stainless steel tanks and barrels with yeasts followed by 6 months additional fermentation in the bottle. The result was a wine of pale yellow color that had a medium and fizzy finish. I liked this sparkling Chardonnay and rated it a 91.

Our second and final sparkling wine was a 2021 Cesarini Sforza Brut Rosé Trentodoc, another 12.5% alcohol sparkling wine. The Brut Rosé was made from 85% Chardonnay and 15% Pinot Noir grapes. It was fermented in stainless steel and aged for between 24 and 36 months on the lees. The resultant wine was a pale pink color and had a smooth, medium and pleasant finish. I rated this nice rosé a 91 as well.

The Cantina D’Isera wine is imported by Matinicus Wines representing Steven Berardi Selections and the Cesarini Sforza wine by Bannvilli Wine Merchants. Both of these wines would be a great idea at holiday festivities. My thanks are extended to Irene for arranging the tasting.