A good wine book makes just about as ideal a gift for a wine lover as a bottle of wine. While I’m always willing to dig into a wine encyclopedia or take a deep dive into the wines and wine makers of a specific region, I think I might be even more smitten by a well-told story that delves into the history and culture of wine. 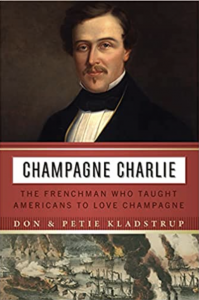 Such a volume is Champagne Charlie: The Frenchman Who Taught Americans to Love Champagne, by Don and Petie Kladstrup.

Ignoring critics who warned that America was a dangerous place to do business, Heidsieck plunged right in, considering it “the land of opportunity” and succeeding there beyond his wildest dreams. Those dreams, however, became a nightmare when the Civil War erupted and he was imprisoned and nearly executed after being charged with spying for the Confederacy.

New York Times wine writer Eric Asimov wrote of Champagne Charlie, “As compelling as Heidsieck’s story is, I was especially absorbed by the descriptions of 19th-century business, before automobiles and telephones, when bottles of Champagne traveled across the Atlantic in cushioned baskets and across the country by rail and coach.

“The writing is easygoing and inviting, and the Kladstrups do not shy away from the moral contradictions of Heidsieck, who strongly denounced slavery in the United States yet hoped for the South to win because it was good for business.

“You won’t learn much about Champagne in this book. But it’s engaging social history and excellent storytelling.” 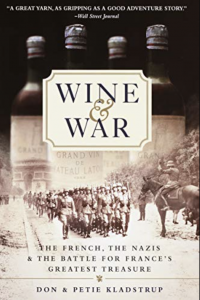 Among other memorable books, the Kladstrups also wrote Wine and War: The French, the Nazis, and the Battle for France’s Greatest Treasure, which remains one of the best books about wine history and culture that I’ve ever read. It goes into deep but readable detail in covering the remarkable untold story of France’s courageous, clever wine makers, who protected and rescued the country’s most treasured commodity from German plunder during World War II.

Finally, of course I can’t let the old year slip away without recommending the latest update of the beloved English wine writer Hugh Johnson’s latest Pocket Wine Book for 2022. It’s filled with tiny type covering the basics of all the world’s wine regions, with condensed information about thousands of individual wines. A must-have, it’s an encyclopedia that fits in your pocket.

OrderHugh Johnson’s 2022 Pocket Wine Book today in hardcover from Amazon.com, or start reading the Kindle edition on the spot for $8.99.