Dentici: a turn to winemaking

Outside of the town of Montefalco — arguably the wine center of the region of Umbria — lies Rialto Azienda Agricola di Eraldo Dentici, in Rialto-Casale. Here Signor Eraldo Dentici and his wife, Chiara Francisi, oversee the production of a number of vegan wines, both white and red. 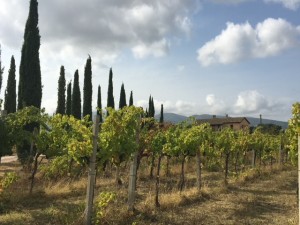 Eraldo Dentici didn’t come to the wine industry by the usual route. He’s not from one of those families who have been involved in wine for generations. Though his parents, like many Italian agricultural families, grew grapes and made wine, it was strictly for their own consumption, and wine was not their primary occupation or interest. Enrico himself has a degree in surveying, not winemaking.

However, he said, he soon discovered he was not anywhere near as interested in surveying as in growing grapes. His family had some agricultural land in Rialto-Casale which they made available, so, as a lark, he decided to try his hand at grape growing and wine making. He soon found an undiscovered passion blooming.

Dentici wines are vegan — meaning there are no animal products used the production process. (Traditionally, winemakers have used a range of animal products – egg whites, milk products, dried blood, or even dried fish bladders – as part of the process of “fining,” or clarifying wine, but in recent years, vegan reagents are also being used.) 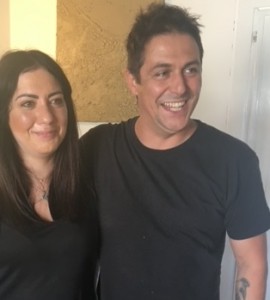 Now we move to the important stuff — the tasting. Normally, we begin with the white wine, but Eraldo left this until almost last. Each wine was presented with superb complimentary food made by Eraldo’s wife, Chiara. Unfortunately, I did not obtain the description of these unbelievable dishes.

The first wine was a 2020 Romeo Umbria Rosato IGT, a 100% Sangiovese grape offering named after Eraldo’s son. This 14.5% alcohol Rosato was made from grapes picked on five different days that were lightly pressed somewhat later. The Romeo was a very light ruby color with a light fruit nose. It finished medium and I rated it an 89/90. It would be great as an aperitif.

Next we tried a 2020 Virgi Rosato di Sagrantino, an Umbria Rosato IGT. The 14% alcohol wine made from 100% Sagrantino grapes taken on three different days. The Virgi was named after Eraldo’s daughter. This complex wine featured a strong fruit nose and very light ruby color. It finished medium and slightly sweet. I rated this strong Rosato a 91.

The third wine was a 2019 Musa Umbria Rosso IGT, a 15% alcohol offering made from 100% Sangiovese grapes. I didn’t obtain the fermentation and aging details on this wine, but the resulting wine was ruby in color with a light leather nose. It finished medium long and very smooth. As we talked during its tasting, it opened beautifully and I recommend that you decant this at least ½ hour before serving. I liked this wine and rated it a 92.

A 2018 Corcurione Montefalco Rosso DOC was next. The Corcurione was a 15.5% alcohol blend of 60% Sangiovese, 30% Merlot and 10% Sagrantino grapes. Again, I did not obtain the fermentation and aging details, but the product of this was a wine of dark ruby color with a complex but nice nose. It finished medium long and very smooth. This wine forced me to change my opinion on Montefalco Rosso that it needed at least 15% Sagrantino in the blend. I really liked this wine and rated it a 92/93. It needs decanting but also opens beautifully.

Eraldo next gave us a change of pace with his 2020 Esimo Umbria Grechetto IGT, a 14.5% alcohol orange wine. The Esimo is a blend of 85% Grechetto, 10% Trebbiano Toscano and 5% Chardonnay that was fermented for 40 days with the skins. Its color was orange and it had a nice fruit nose. I don’t know orange wines well enough to venture a rating.

The flagship wine was a 2015 Cipriano Montefalco Sagrantino DOCG, a 16% alcohol, 100% Sagrantino grape offering. The grapes were picked on three different days 10 days apart. Unfortunately, I did not obtain the fermentation and aging details here either. The Cipriano had a deep ruby color and a strong leather nose. It finished very long and exceptionally smooth, opening beautifully. I loved this excellent example of Montefalco Sagrantino and rated it a 94. It definitely needs an hour of decanting.

Before we departed, Eraldo and Chiara served us their desert wine, a Piccolpasso IGT. Everyone loved it and I recommend it, but won’t rate it.

Our thanks go to Eraldo and Chiara for their great hospitality, and compliments to Chiara for her delicious food. Their wines are represented in the USA by Vegan Wines. I highly recommend all of them.