The Tenuta Carretta winery is located in the southern part of Piedmont in the town of Piobesi d’Alba in the Roero valley. The winery has been there since 1467 and today is owned by the Miroglio family. We recently received two high-end wines from this producer, and enjoyed them the way Italians drink wine: with a meal.

Our family began the meal with a 2012 DOCG Barbaresco Riserva Cascina Bordino, a 14% alcohol, 100% Nebbiolo hand-picked grape wine from the vineyards of Cascina Bordino near the town of Treiso. The Cascina Bordino had been aged for nine months in oak and had a total aging of fifty months. The wine was a very dark garnet in color with a complex but pleasant nose. It started medium and finished very long and very smooth. Everyone really enjoyed this excellent example of an elegant Barbaresco. I rated this wine a 92. 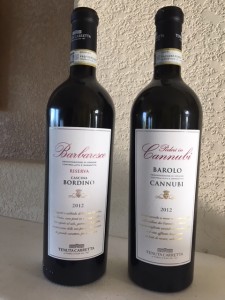 When the Barbaresco had been consumed we moved to a 2012 DOCG Barolo Cannubi, another 14% alcohol, 100% hand picked-grape wine from the Cannubi vineyard near the town of Barolo. The Cannubi was aged twenty-four months in oak barrels and a further nine months in the bottle. It was deep garnet in color and had an interesting nose best described as smoke. This wine started very big in the mouth and continued to a very long and smooth finish. I will admit that I am a Barolo lover and I really enjoyed this strong example of Barolo. I rated this wine a 93.

Tenuta Carretta offers other types of wines than the two tasted, including one of my favorite white wines from this area, Roero Arneis. I look forward to trying these at some point in the future.

Tenuta Carretta is imported into the U.S. by (among others) Specialty Wine Company in Ohio and Specialty Cellars in Texas and California.

My friends at Well Com, Annalisa Chiavazza and Sara Frau, who had sent me the two Tenuta Carretta wines, also sent me a Port – The Croft 430th Anniversary Celebration Edition Reserve Ruby Porto. I am not a devotee of Port wines but this one was excellent for me, a non Port drinker. It was not as strong as most Ports seem to me, and it was a lot smoother. It is imported in the USA by the Kobrand Corporation.