Located in the low hills of Civitanova Alta just above the city of Civitanova Marche in the region of Le Marche lies the Cantine Fontezoppa. Founded in 1999, Cantine Fontezoppa, an organic winery, features two wines unique to this area, the white wine Ribona and the red wine Vernaccia Nera. Its vineyards lie between the towns of Civitanova Alta and Serrapetrona at an altitude between 200 and 500 meters above sea level and produce about 300,000 bottles per year of wine. 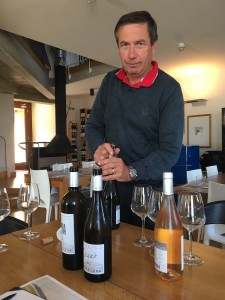 On a sunny day not too long ago we visited Cantine Fontezoppa with our Le Marche expert, Discover Marche’s Monia Scoccia. We were very fortunate in that our tasting was conducted by Fontezoppa’s winemaker, Giovanni Basso. Cantine Fontezoppa also offers other traditional area wines and thus we began with a 2017 Marche Passerina IGT Jaja. The Jaja was a 100% Passerina grape, 12.5% alcohol filtered wine fermented and aged in stainless steel tanks. It was very pale straw in color with a light fruit nose and finished medium and stronger than most Passerinas. I rated this wine an 89.

Our second white was a 2017 Pecorino DOC Citano, a 100% Pecorino grape, 13% alcohol wine. Made from hand-picked grapes as was the Passerina Jaja, the Citano was fermented and aged in stainless steel. It was straw yellow in color with a light fruit nose. It finished fruity, medium and very smooth. The Citano will stand for 7-8 years and I rated this wine a 90.

Next we tried a 2017 Colli Maceratesi Ribona DOC, a 100% Ribona grape (also known as Maceratino Bianco), 13.5% alcohol wine. The Ribona was fermented and partially aged in stainless steel with an additional 12 months of aging in the bottle. The wine was pale yellow in color with a light nose. It finished medium and had great minerality. The Ribona will stand for five years. I really liked this wine and rated it a 91/92.

Moving from the white wines we tried a 2017 Frapicci Marche Rosato, a 12.5% alcohol wine made from 95% Sangiovese and 5% Lacrima Nera. Fermented and aged in stainless steel, this rosé was copper in color with a very light fruit nose. It finished medium smooth and really nice. I liked this wine and rated it a 90.

The second red was a 2015 Carpignano Serrapetrona DOC, a 100% Vernaccia Nera grape, 12.5% alcohol wine. There are only 60 hectares of Vernaccia Nera in the world and Fontezoppa has 15 of these. Fermented and partially aged in stainless steel, this wine’s final aging occurs for 12 months in the bottle. The resulting wine was garnet in color with a fruit and leather nose. It finished medium long and smooth with a hint of pepper. Signor Basso said that the Carpignano was a red wine dressed as a white. It should be served cold (11-13°C). I really liked this wine and rated it a 91/92.

Our third red wine was a 2014 Falcotto Serrapetrona DOC, a 100% Vernaccia Nera grape, 13% alcohol wine. Fermented and partially aged in stainless steel, the wine was refined in oak barriques for 12 months. The Falcotto was garnet in color with a complex light leather nose. It finished medium and smooth. I rated the wine a 90.

The final still red was a 2014 Moro Serrapetrona DOC, another 100% Vernaccia Nera wine with 14% alcohol content. Fermented in stainless steel the Moro was aged for 18 months in oak barriques and followed by 12 months in the bottle. It was dark garnet in color with a strong leather nose. It finished very long, very smooth and elegant with great minerality. I rated this excellent wine a 93.

Vernaccia Nera wines are well known in a sparkling form. Cantine Fontezoppa bottles one of these, Fabrini Vdi Serrapetrone, a 12.5% alcohol wine made from 100% Vernaccia Nera grapes. Garnet in color with a fruit nose, the Fabrini had a very smooth finish. Even I, not a lover of sparkling wine, thought this was a great sparkling wine.

We finished with the Terreni di San Serevino Rosso Passito DOC Cascia, a 15% alcohol dessert wine made from 100% Vernaccia Nera grapes. Amber in color, this was a very nice dessert wine.

This was my initial tasting of Vernaccia Nera wines and I was very impressed with them, as I was with the Ribona. I thank Signor Basso for his time and sharing of his knowledge on these wines. Fontezoppa wines are imported into the USA by among others Cantiniere Imports & Distributing in Columbia, MD.

Thanks to Signor Basso for his time and sharing of his knowledge on these wines.