In 2011 I wrote about an excellent family-owned winery in Sicily named Planeta. At that time Planeta owned five separate wineries, most of which were in the western part of the island. Since then, Planeta has expanded to include a winery located on the eastern side of Sicily in the vicinity of Mount Etna, Europe’s most active volcano. I recently contacted my friend and Planeta family member, Marcello Arici, asking about Planeta’s Etna wines and he kindly offered to send some samples for a tasting.

The wines from the Etna area are very different from those found in other parts of Sicily. Though the soils of Sicily have various historical origins in the past, the soil around Mount Etna is different in that it is loose, black volcanic soil constantly refreshed at various times by the eruptions of the volcano. Thus, the vineyards there contain soil different from the rest of the island.

The primary red grape in the Mount Etna area is Nerello Mascalese with Nerello Cappuccio a distant second. Nerello Mascalese is found on the northern, eastern and southern slopes of Mount Etna. It is a late ripening grape that is somewhat difficult to perfect owing to the altitude and micro climate risks. However, when properly handled, it produces a really superb wine.

The most notable white grape in the Etna area is Carricante, which only grows on the slopes of Etna. It is hardly the most-planted white grape on the island, but it is one of the most distinctive grapes which, when properly produced and vinified, becomes a really interesting wine with high acidity and complexity. For a more in-depth study of these grapes, I recommend Ian D’Agata’s excellent book, Native Wine Grapes of Italy, which is one of my best references.

Our first Etna wine was a 2017 Etna Bianco DOC, a 100% Carricante grape, 13% alcohol wine. This wine was made from hand picked grapes taken in early October, refrigerated immediately at 8°C and then pressed and fermented at 15°C. Then 85% of the wine was placed in stainless steel with the remaining 15% placed in French oak tonneaux, both on the lees until February. Bottled in March the Etna Bianco had a very pale yellow color with a light fruit nose. It finished medium and pleasant to the taste. I rated this wine an 87.

Next we tried a 2017 Etna Rossa DOC, a 100% Nerello Mascalese grape, 14% alcohol offering, another wine from hand selected grapes picked after mid-October. The Etna Rosso grapes were immediately refrigerated at 10°C in both 50hl wooden vats and stainless steel, remaining on the skins for 14 days. Then it was decanted and aged in a combination of 50hl wooden vats and stainless steel for 6-8 month before bottling. The result was a medium wine that was garnet in color with a complex nose. It finished medium long and very smooth. I rated this wine an 89/90.

At a lunch with friends we tried a 2016 Eruzione 1614 Carricante DOC, a 90% Carricante and 10% Riesling blend, 13% alcohol wine, another offering made from grapes hand-picked in mid-October. The grapes were refrigerated at 8°C and soft pressed at 15 °C and then fermented in stainless steel with the wines remaining on the lees until July when it is bottled. The result was a wine of pale yellow color with a fruity nose. It finished medium and smooth. One of our friends who drinks only white wines thought it a bit too strong, but I liked it and I rated this somewhat acidic but enjoyable wine an 89/90.

On the occasion of a family dinner we tried a 2016 Eruzione 1614 Nerello Mascalese DOC, a 13.5% alcohol blend of 91% Nerello Mascalese and 9% Nerello Cappuccio. The grapes were picked and placed in crates and then refrigerated at 10°C before being hand selected. After removal from the stems, they are fermented at 25°C in stainless steel with the skins, then soft pressed followed by malolactic fermentation in stainless steel. The wine was then aged for 12 months in 25 and 35 hl wood casks. The result was a wine with garnet color and a light fruit nose. It finished long and exceptionally smooth and I rated this excellent medium wine a 93. If you are wondering what the “1614” represents, it refers to one of the worst eruptions of Etna in recorded history.

Included in the tasting shipment were several non-Etna wines. I was really impressed with the 2018 Rosé Sicilia DOC, a 12.5% alcohol blend of 50% Nero d’Avila and 50% Syrah. Thanks to the urging of my wife, I have developed a taste for these wines and now feel comfortable rating them. This wine was very pale pink in color with a very fruity nose. It finished medium and very pleasant. I felt that it was the best rosé that I have tasted in a long time and I rated it a 91.

Marcello also sent two of Planeta’s La Segreta line of wines. One was a 2016 Nero d’Avila DOC, a 13.5% alcohol offering dark garnet in color with a light leather and pepper nose. It finished medium long and smooth and I rated this wine an 88/89. The second La Segreta was a Grillo DOC, a 100% grillo grape, 12% alcohol wine. It was pale yellow in color with a nice fruit nose. It finished medium with a light fruit taste. With a salmon main course, it got better as we drank it. I rated this wine an 88.

My thanks to Marcello, enologist Patricia Toth and to Kristin Calmes with Planeta’s US importer, Taub Family Selections, for arranging the wines we tasted and their inputs. Planeta’s wines continue to be of the highest quality and I highly recommend all of them. 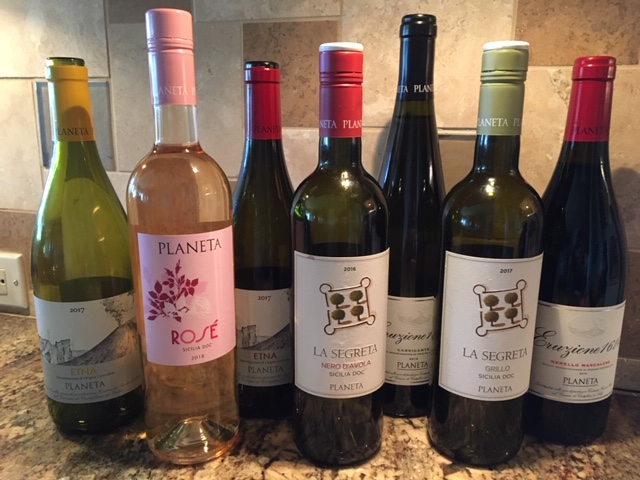