Who’s had their ancestry tested? Raise your hand if you’ve sent off a DNA sample to the good folks at 23andMe or Ancestry.com and the other companies now engaged in the modern art of consumer DNA testing.

You’ll often see us offering links to Wine-Searcher.com, for a very simple reason: Wine-Searcher.com is the place to go online if you want to find where to buy a particular wine that interests you. But as Wine-Searcher.com has evolved over the years, it has turned into so much more. It’s well worth a visit just to discover its many features, including its popular list of the world’s current ten best value wines!

I sent my DNA sample to 23andMe a few years ago and didn’t get back the genealogical surprises that I’d been hoping for. It showed a lot of English and German, a bit of Scandinavian, Dutch, and French, and just a bit of seasoning from Mediterranean Southern Europe. It was fun to read the report, but it mostly just confirmed things that I already knew.

I had been hoping for something more exciting … something like Zinfandel. Now, there’s a grape family that had its whole ancestral story turned upside down by research and DNA testing.

When I started writing about wine, the conventional wisdom on Zinfandel was that it was a mystery grape: It was hugely popular in California, where as recently as the 1980s it made up 20 percent of the state’s vineyards. (It has since been surpassed by Cabernet Sauvignon, but still edges out Pinot Noir, Merlot, and Chardonnay.) 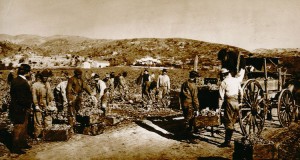 What made Zinfandel a mystery? No one seemed to know its origin; no one had ever heard of such a wine. The grape appeared suddenly in California during Gold Rush days, hyped by a promoter named Agoston Haraszthy, who declared himself a Hungarian Count and claimed that he personally had brought Zinfandel grape cuttings to California from the vineyards of Hungarian royalty.

Haraszthy planted a lot of Zinfandel at his Buena Vista winery in Sonoma County, although it’s certainly fair to say that he exaggerated his role as the grape’s discoverer. Zinfandel (also then known variously as “Zinfindal,” “Zierfandler” or “Zeinfindall”) was known in the Eastern U.S. as a table grape long before Haraszthy arrived in Napa. Historians have found records of it in a horticultural fair in Massachusetts in 1832.

But where did it come from? Wine scientists had long noticed a similarity between Zinfandel and Primitivo, a red grape grown in the Apulia region in Southern Italy’s “boot heel.” That assumption was based on the shape of the vine’s leaves and the fruity, berrylike flavor of the wines both grapes made.

Indeed, when DNA testing became available for grapes in the 1990s, it quickly appeared that the two grapes were at least near siblings if not identical. So, did Zinfandel come from Italy? A historical quirk complicated that question: Zinfandel apparently was known in the U.S. many years before the first Primitivo was bottled in Italy.

So, did Zin find its way from America back to the old country? Or did both grapes simply share a common ancestor? Continued inquiry led scientists across the Adriatic from Italy to Croatia, where they thought they might have found Zin’s parent in Plavac Mali, a wine grape of Dalmatia. DNA testing by the University of California at Davis’ Professor Carole Meredith revealed that Plavac Mali is a cousin of Zinfandel, but not a parent.

“It’s most likely that a rare vine grows someplace in the Balkans, an anonymous ancestor that gave birth to Zinfandel, an immigrant grape that came through New England on its way to become California’s trademark wine,” I wrote in 1999.

But just a year or two later, Meredith and her team lifted the veil of anonymity: The grape Crljenik Kasteljanski (“Curl-yen-ik Cast-el-yan-ski”) seemed to be a perfect genetic match for Zinfandel. And that settled it, or so we thought. In one last nuance, sleuths found yet another variety, Tribidrag – also a DNA twin from Dalmatia in Croatia.

Tribidrag (“Tri-bi-drog”), declared the British wine writer Jancis Robinson, deserves the title as the original ancestor of Zinfandel, Primitivo, Kratosija, and Crljenak Kastelanski for a simple reason: Priority wins, and the oldest name earns the title!

“While the first written reference to the name Primitivo dates from 1799 and to Zinfandel from 1837, the first reference to Tribidrag dates all the way back to the 15th century,” declares the “About Tribidrag” page on Tribidrag.org, published by the Croatian Tribidrag trade organization.

”Etymologically, the name Tribidrag comes from the Greek language and means ‘early ripening.’ The Italian name for this grape variety came from the Latin language (primativus) and means the same: ‘the first to ripen.’ The etymological origin of the name Zinfandel has never been discovered and it is considered a mystery…”

I’ll drink to that, with a glass of Giorgio Rivetti’s “Indigenous” Salento Primitivo, featured in today’s tasting report, which you’ll find below. 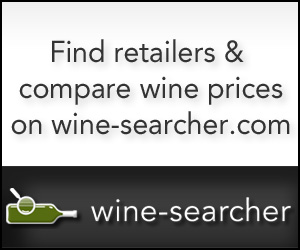 You’ll often see us offering links to Wine-Searcher.com, for a very simple reason: Wine-Searcher.com is the place to go online if you want to find where to buy a particular wine that interests you. But as Wine-Searcher.com has evolved over the years, it has turned into so much more. It’s well worth a visit just to discover its many features, including its popular list of the world’s current ten best value wines! 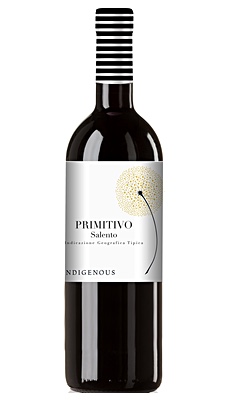 This is a dark, ruby-red wine with a thin clear edge. Its fruity, slightly perfumed aroma offers a blend of dried cherries and fresh, tart blackberries with a spicy back note. Produced in stainless steel with no hint of oak, it offers good cherry-berry fruit in a firm acidic flavor structure with soft but persistent tannin working on your lips and tongue and perceptible but not hot 14% alcohol. You can pick up a hint of the Zinfandel connection in that ripe berry fruit, but it’s much more earthy and rustic than the California style. U.S. importer: Indigenous Selections LLC, Fort Lauderdale, Fla. (Nov. 21, 2019)

FOOD MATCH: This rich, fruity Primitivo would be a natural with red meat, game, or darker poultry like duck or, of course, Thanksgiving Turkey. As noted above, it’s also a surprisingly good match with hot-and-spicy fare. And its deep intensity makes it one of those rare wines that pairs with dark, bittersweet chocolate.

WHEN TO DRINK: The winery forecasts four or five years to evolve, which would place this 2014 right on its peak. It’s drinking well now, with plenty of fruit and tannin remaining, so I don’t see any need to rush.

VALUE:
My $18 local price is a decent value for this fresh and fruity Euro-style take on Zinfandel.

I found this bottle in my local Whole Foods wine shop, so it might be worth checking a Whole Foods in your neighborhood if you have one nearby.

Want tips to still more good, inexpensive wines? Here are Wine-Searcher links to vendors and prices for a bunch more wines for $10 or less that I’ve told you about during the past year or two. Please tell us about your favorites!

If you have questions, comments or ideas to share about today’s article or wine in general, you’re always welcome to drop by our online WineLovers Discussion Group, the Internet’s first and most civil online community.

Discussions are open for public viewing, but you must register to post. If you’re a Facebook user, you can join our forum with a single click! All you need to do is visit the forum and click “Social Login” at upper right.

We’d also be delighted to have you visit and “Like” our WineLovers Facebook Page. This way you can get Facebook notifications when there’s a new The 30 Second Wine Advisor issue or a topic of particular interest on the WineLovers Discussion Group (WLDG).

Unsubscribe:
We’re sorry if you must leave us, but simply click the “unsubscribe” link at the bottom of your Email edition to be instantly removed from the mailing list.

Change address:
The quickest and easiest way to change your email address is simply to unsubscribe from your old address and register again from the new one: Subscribe to The 30 Second Wine Advisor (free).

Archives:
Read nearly 20 years of past articles in the Wine Advisor Archives.