An Attitude for Classico: Villa Trasqua

Just north of the city of Siena near the town of Castellina in Chianti lie the 13 vineyards that compose Villa Trasqua: 54 hectares of vines within a single plot on the Pliocene hills. Beginning in the year 1000 AD, the name “Trasqua” appears in all land registers, bequests and inheritances. It was recognized as a prestigious plot of land which expanded throughout history.

Today the Hulsbergen family owns the entire 120-hectare Villa Trasqua estate, which they purchased in 2001.

Like many other Italian wineries, Villa Trasqua is focused on preserving the environment. As such it has been 100% organic since 2014. Though the winery focuses primarily on native Italian grapes, some French varietals are also grown. The emphasis, however, is on Chianti Classico.

A refresher: the designation “Chianti Classico” was instituted in 1716 by Cosimo III, the Grand Duke of Tuscany. The designation specified the area from which the producers could claim the use of the name Chianti Classico and required that all grapes used in these wines be grown only in the designated areas. For a wine to be called Chianti, a minimum of 80% of the grapes used must be Sangiovese with the remainder being any red wine grown in the proper area. However, today the producers may use 100% Sangiovese if they choose, but this is rare. 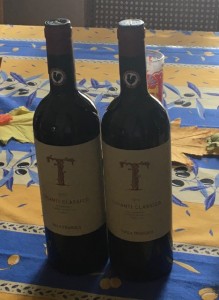 Several months ago I saw a publicity release describing one of the Villa Trasqua wines and I asked if Villa Trasqua would send me some samples to taste. Fortunately for me, Villa Trasqua agreed and sent me four of their Chiantis to taste. As I like to do, I was able to taste each wine separately while eating my wife’s excellent cuisine. Now let’s go to the tastings.

We will start with a 2016 Chianti Classico DOCG, a 14% alcohol blend of 80% Sangiovese, 10% Merlot and 10% Cabernet Sauvignon. This wine had its vinification in stainless steel tanks at controlled temperature of 26/28°C with maceration on the skins for a minimum of 20/22 days. It was aged in 5,000-liter Slavonian oak barrels for 12 months. We tasted the Chianti Classico with my wife’s homemade Pumpkin Lasagna and Maiale Milanese along with stuffed tomatoes and green beans. The wine was ruby in color with a complex yet pleasant nose. It finished medium and smooth. I rated this wine a 90.

The second wine was a 2015 Fanatico Chianti Classico DOCG Riserva. The Fanatico was a 14% alcohol blend of 92% Sangiovese, 5% Cabernet Franc and 3% Merlot. It was vinified in trunconic wooden 5,000-liter barrels at controlled temperatures of 26/28°C with maceration on the skins for a minimum of 22/25 days. It was aged for 24 months in 5,000 liter Slavonian oak barrels followed by at least 12 months in the bottle. We tasted the Fanatico with bacon-wrapped beef filets accompanied by oven roasted potatoes and broccoli and cauliflower in a cream sauce. The wine was ruby in color with pleasant light fruit nose. It finished medium and smooth with light tannins and medium acidity. I liked this solid Chianti Classico Riserva and rated it a 90/91.

Our third wine was Villa Trasqua’s offering of a Super Tuscan. The 2013 Trasgaia Toscana IGT Rosso was a 14% alcohol blend of 50% Sangiovese, 40% Cabernet Sauvignon and 10% Cabernet Franc. The Trasgaia followed the same vinification as the Fanatico and had the same aging process. The Trasgaia was served along with Italian sausage ravioli. The wine was ruby in color with a light fruit nose. It finished medium long and smooth. I really liked this very drinkable wine and rated it a 91/92. 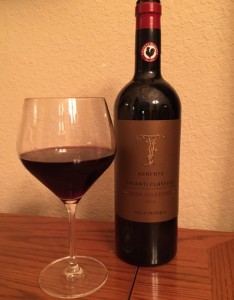 Our final wine tasted was Villa Trasqua’ flagship offering, a 2012 Nerento Chianti Classico DOCG Gran Selectione. The Nerento was a single vineyard cru from the oldest vineyard in the estate. This vineyard was first shown as prestigious in 1854. The Nerento was vinified in trunconic 5,000 liter wooden barrels at controlled temperature of 26/28°C with maceration on the skins for 22/25 days. It was aged for 30 months in French oak tonneaux of 500 liters followed by a minimum of 12 months in the bottle. The result was a wine of ruby color with a complex but pleasant nose. It was tasted with beef roast cooked in red wine with potatoes and carrots. The Nerento finished very long and exceptionally smooth with a pleasing bite. I rated this excellent wine a 93/94 and highly recommend it.

Thanks to the Hulsbergen family for sharing their high-quality wines with me. If you are looking for really good Chianti, the wines of Villa Trasqua are well worth considering. They are imported in the U.S. by Misa Imports, Inc.