On the highest hill in Montegiorgio near the city of Fermo in the province of Le Marche we find the estate called Societa Agricola Officina del Sole. It occupies 42 hectares (103 acres) with fabulous views in all 360 degrees of sight. The estate was begun only about 25 years ago – when owner Lanfranco Beleggia purchased an abandoned farm and began the project to create an estate that included a vineyard with winery, gourmet restaurant and luxury accommodations and grounds including a spa, all built with preservation of the environment as a goal.

Officina del Sole vineyard, with the town of Montegiorgio in the background.

On a sunny early fall morning we visited Officina del Sole with our Le Marche guide, Monia Scoccia, cofounder of the site Discover Marche. Monia had arranged our visit with Managing Director Beatrice Beleggia, the family member overseeing Officina del Sole. Our tour of the estate and subsequent tasting was conducted by enologist Davide Di Chiara who oversees wine operations including serving as the winemaker. The estate was most impressive – including the modern winery.

After our tour of the estate grounds, we returned to the tasting room to sample the wines of Officina del Sole. The first wine presented by Di Chiara was a 2016 Vino Spumante di Qualita Brut 360 (Trecento Sessanta), a charmat-method sparkling wine composed of an equal blend of Passerina, Chardonnay and Verdicchio grapes. This 12.5% alcohol wine was pale yellow in color with a very light fruit nose. It finished medium but very smooth and I rated this very nice wine a 90.

Next we tried a 2017 Marche IGT Sensi, a 12.5% alcohol blend of 55% Passerina and 45% Sauvignon Blanc grapes. The Sensi was very pale straw yellow with a beautiful light fruit nose. The wine was aged in stainless steel tanks for four months. It finished medium but smooth with nice minerality. I rated this wine an 89.

Our third white wine was a 2017 Falerio Pecorino DOC Franco, a 100% Pecorino grape, 14% alcohol wine. The Franco was pale yellow in color and had a light but complex nose. This wine was aged in stainless steel tanks for six months. It finished medium to long and was an excellent example of a Marche Pecorino. I rated this wine an 89/90.

The last white wine was a 2016 Falerio Pecorino DOC Franco Franco, a late harvest 100% Pecorino grape offering. The 14% alcohol Franco Franco was also a pale yellow in color with a clear light fruit nose. It differed from the Franco because it had four months aging in stainless steel tanks followed by two months in oak barrels. The wine finished medium long and very smooth. I really liked this wine and rated it a 90/91. 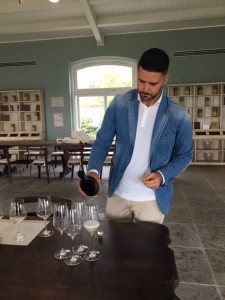 The first red wine was a 2017 Marche Syrah IGT Rosso Frutto 14% alcohol blend of 85% Syrah and 15% Lacrima grapes. It was aged for six months in stainless steel tanks. The Rosso Frutto was garnet in color with a light fruit nose. It finished medium and light but with a pleasant taste. I rated this wine an 88.

Our final red and the flagship wine of Officina del Sole was a 2015 Marche Rosso IGT Tignium, a 14% alcohol, hand-harvested 100% Syrah grape wine. Half of the grapes were aged in oak casks while the remainder was in oak tourneau, both for twelve months followed by another year in the bottle. The resulting wine was dark garnet in color with a complex nose. It finished very long and smooth and I rated this wine a 91/92.

Since the estate restaurant was closed the day we tasted, Managing Director Beatrice Bellegia offered us lunch at Villa Lattanzi, a luxury hotel/restaurant that is also owned by the Bellegia family. Villa Lattanzi is located in Torre di Palme overlooking the Adriatic Sea in the Fermo region just off the coastal highway. This facility was also beautiful and the food was superb. Signor Carlo Carlini, assisted by Signor Giuseppe Ubini, led us through a specially prepared multi course meal, each course of which was accompanied by one of the Officina del Sole wines that we had tasted that morning. At the conclusion of the meal I passed my compliments to the chef on a fabulous meal.

My thanks go to the Bellegia family and everyone involved in our visits for making these visits something to remember. If you choose to visit Officina del Sole or Villa Lattanzi, you will not regret your decision. I highly recommend both.